You often hear of instances where life imitates art and vice versa. At PIX-US, we blend art and technology, but it’s no imitation game. Both facets of our business are authentically employed to create handcrafted computer-generated images (CGI) for use in print, web, and motion applications. Our images are photorealistic and beautiful.

What’s Art Got to Do With It?

In 2013, someone asked us this question, and we were taken aback because looking at CG images from an artistic perspective is second nature to us. When the question was posed, it turned out to be a defining moment in the foundation of PIX-US. Our visceral reaction helped us discern our identity. In CGI, we certainly use technology, but it’s not just numbers, math or science. It’s a combination of art and technology. Our staff of technologically savvy artists looks at every image, asking themselves not only if it’s technically accurate but also, “Is it beautiful?” It’s personal to all of us.

Stunning, meticulously created images are just one of the reasons to choose CG over traditional photography. We save natural resources in the CG process, by reducing the need to ship large, heavy products that end up as waste along with the sets built for your project. And when you go on location it’s no better given the transportation, generators and craft service waste. We’re extremely proud of our program that recycles all unused pixels.

At the Heart of US

When we started PIX-US it was out of a love for photography and the fact that we wanted to be involved in the next step in the imaging industry. We want to create stunning marketing images — that’s why we look at the light, composition and the lens choice with such intensity when we create our CG renderings. We use the same photography vernacular and concepts that we use when creating photographs.

We imagined producing beautiful images when we started, and we’re fortunate to continue doing that. But now we are involved in things we didn’t imagine, like creating 1.2 million renders to allow a client to show every variation of their product line. There is just not any practical way you can do that as a conventional photography job. We are having discussions with clients about things we never imagined and are finding ways to produce work that goes beyond anything we dreamed of creating. We’re truly excited to be involved in such great projects with our clients, both the large ones and the small ones. While we still love photography we are also aware that CG-Imaging is not the future of product photo illustration, it’s the right now.

Call or email us. We’d love to talk to you about your project. 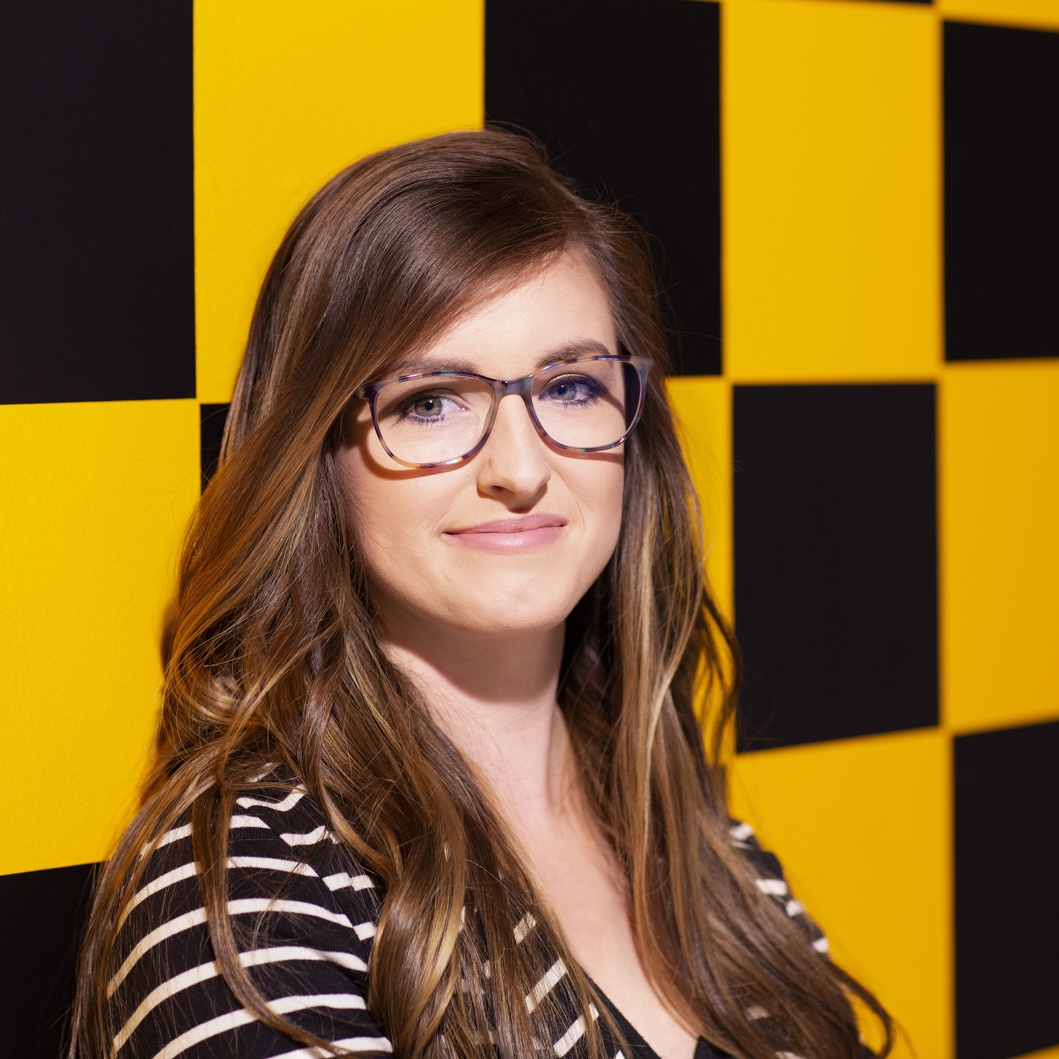 It didn’t take long for Alison to rise in the ranks of PIX-US. From post-production artist as a recent college graduate to production director and partner in less than five years, Alison has been interested in CG ever since she toured Mark Wagoner’s studio as a photographic technology student. Her time at PIX-US has flown while she’s been having fun building her skills. And her drive is seemingly unparalleled.

“I’m constantly pushing myself as well as the PIX-US team to be better and improve our skill sets,” Alison says. “I’m calm under pressure, good at separating emotion from work for the most part, which is difficult considering I absolutely love this company! And I’m always eager to master the next thing.”

Right now, that’s sales, a newer aspect of her role at the company. “If I succeed in this way, we all do,” she explains.

And if you see Alison rocking headphones in the office, it’s usually not any of the typical tunes de jour. “I more often listen to random TED talks or training videos when I’m working on certain things, or I’ll find a ‘focus’ playlist so that it’s not completely quiet but not distracting.”

A self-described introvert, Alison surprised herself when she realized that one of her favorite parts of her role is working with the clients. “I do everything from sales to post-production—well, when Mackenzie thinks she needs a vacation,” she quips. “My job is to work with the PIX-US team and our clients to move projects smoothly through our process.”

Aside from loving CGI and a having a good rapport with team members, there are many aspects of the job that keep Alison at PIX-US. She was quick to point out the company’s proximity to the interstate and the good food and shopping nearby, but nothing beats the last day of the week, but not for the reason one might expect. Though Alison looks forward to free time to spend with her husband and working on portrait photography projects, the end of the work week also brings out the pastry connoisseur in her and a few others on staff. “I’m apple fritters all the way. Fritter Fridays at PIX are the best!” 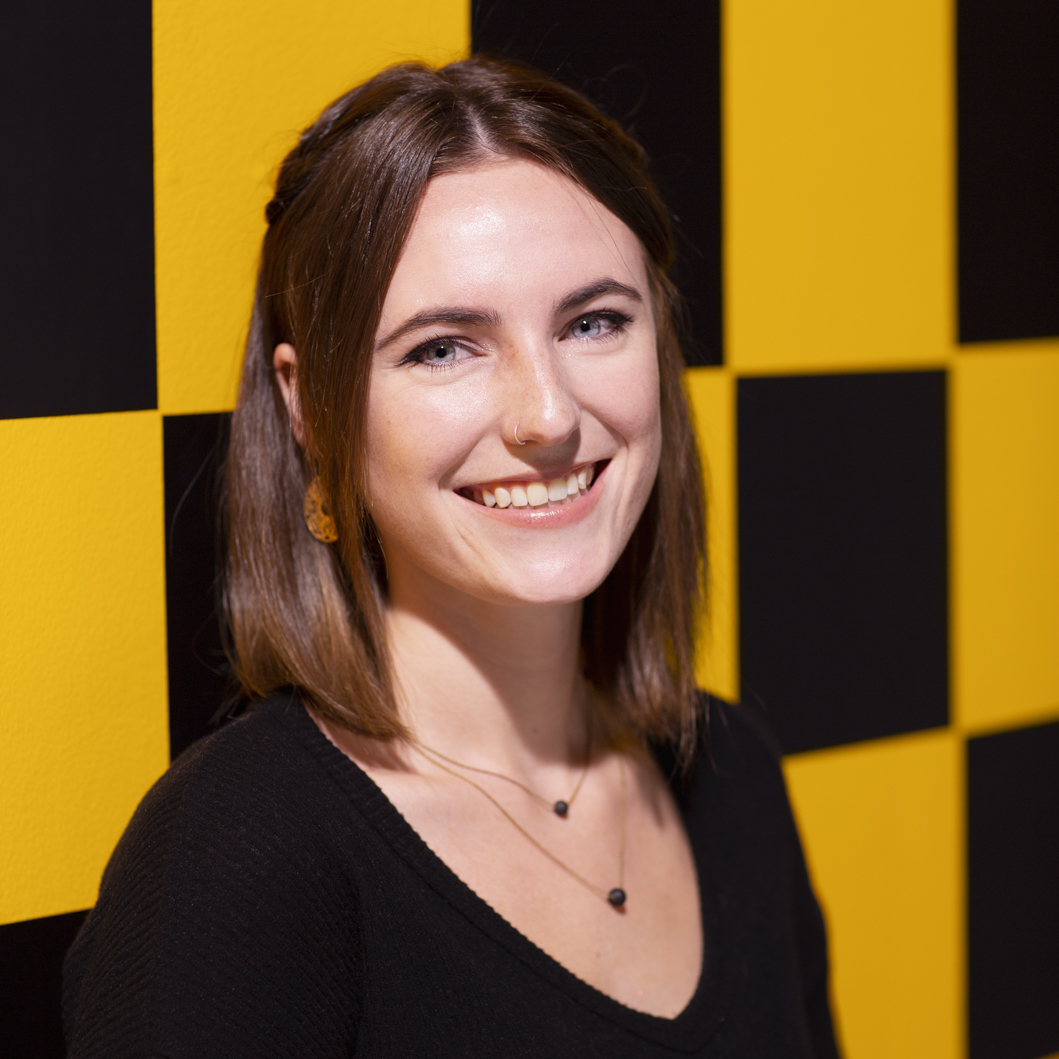 Mackenzie first arrived at PIX-US as an intern in 2017 while she was studying marketing and studio arts at the University of North Carolina at Greensboro. “And they haven’t been able to get rid of me since,” she says with a smile. “My dad sent me an old job listing for a studio assistant and I sent my resume in anyway, and the timing just seemed to work out.”

As the post-production artist, Mackenzie makes corrections and puts the final touches on images. She also assists with social media. “I bring knowledge of marketing, photography, and a positive attitude. But among my not-so-productive talents is having an endless supply of knowledge about cats and the ability to make friends with ducks,” she quacks … err quips.

Photography was a hobby of Mackenzie’s since she was 14, and she stuck with it until it became a job. “I have always loved being creative and for a very long time wanted to be a photographer but decided I wanted to explore other options in a creative field,” she explains. “I love getting to put the finishing touches on an image and getting to see that image being used in real-time. It’s so awesome getting to see something you worked on published online or in a brochure.”

Art has always played a role in Mackenzie’s work. In fact, her first job was as a sandwich artist at Subway during college. “I’ve made a lot of sandwiches,” she says.

A North Carolina native, Mackenzie grew up in nearby Jamestown and went to high school in High Point. She loves Greensboro for its awesome art scene, many places to explore and great food. Outside of work, she stays busy with a variety of hobbies—what her husband calls her “old-lady crafts” like crocheting, knitting, cross-stitching, embroidery, sewing, and other activities. She’s a happy camper when there’s Asian cuisine and caffeine in the form of coffee and tea. Ice cream and chocolate mousse also make her day. She’d one day love to camp out under the Northern Lights, especially if they give off a blue-green hue like such as Pantone color: 3165 C. 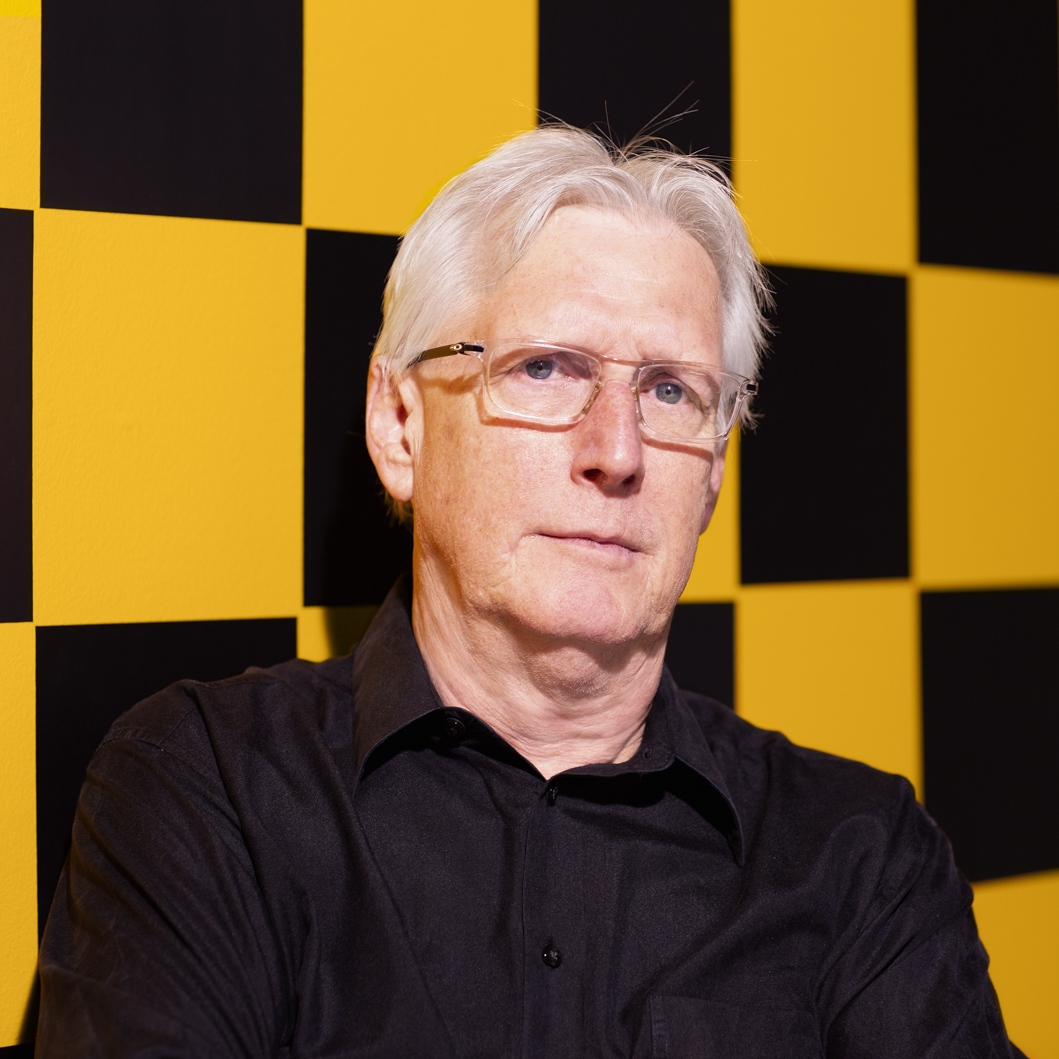 Stewart has been with PIX-US since its inception as a founding partner. He and Mark Wagoner sought to enter the evolving world of imaging with computers in 2013. Since then the business has grown exponentially. It’s the kind of success that he must have thought would make being an adult fun.

“As a child, all I wanted to be was a grownup. I’ve changed my mind. Being young would be more fun,” he says with a wry grin as he attests to not having fully grown up after all. “Hey, can you blame me? My only job was cleaning my room. You know, another thing I wish I could return to is bell-bottoms.”

When he’s not reminiscing, Stewart is passionate about creating images that help clients solve problems and expand their markets. “I really like projects that make everyone on the team stretch their talents and creativity. They’re just fun,” he says. “I get to work with a talented young team that is excited and growing. I’m looking forward to getting into real-time rendering because it’s what’s coming next!”

Even though he studied English at Western Carolina University, he’s naturally drawn to a variety of imagery. “I was always involved in making images, whether art or commercial,” Stewart says. “Computers came onto the scene at the right time to pique my curiosity, and I combined that need for visuals with the geek scene.”

His interests expand outside of imagery to include an ardent love of music. “I couldn’t go a day without it,” Stewart says. “At work, I listen to Baroque symphonies, and I enjoy playing the guitar.” Stewart stays active by playing ice hockey and hiking through the mountains with his wife, Debra, who will only go if he leaves his bell-bottom jeans at home. 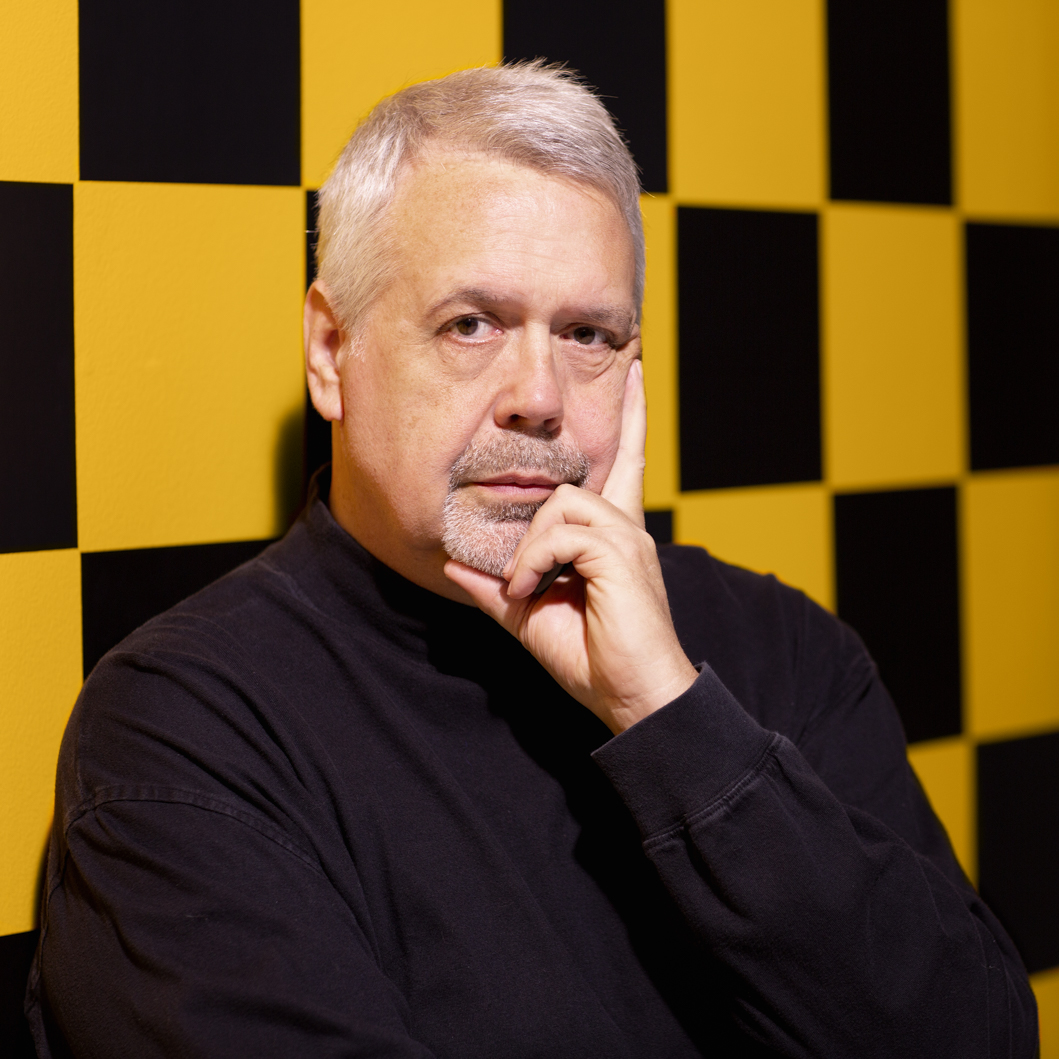 With more than 40 years of experience in creating images for advertising and editorial, Mark’s favorite part of working at PIX-US is the opportunity to pass on his knowledge to other and mentor the team members. “I enjoy seeing them grow as artists and people,” he says.

Having photographed in 25-plus countries for many of the largest U.S. companies, Mark brings a wealth of experience to any project, has excelled at keeping up with industry changes and trends, and is a leader in the 3D advertising industry. And he’s always seeking to learn more about the changing tools of live 3D rendering. “Anything I can add to my repertoire in that area is a plus. It will really change the future of advertising,” says the Reidsville native.

Mark and Stewart Fortune founded PIX-US in 2013. However, the thought process and discussion had started six years prior. As the creative director and founding partner he works with the creative team to ensure that all the images are meeting the high standard that set in the beginning and have the PIX look, which is highly photorealistic. Lately, he’s been intrigued with the more story-driven images the team has created. “But truthfully we are always developing new techniques that are super exciting to be involved in,” he says.

Mark had a strong interest in photography from an early age. “I had wanted to be a performing orchestra musician for a number of years, specifically a percussionist. I did change my mind as two things happened, a deepening of my love for photography and a fear of the piano requirements in music school,” he says. “However, I have no regrets; all seems to have worked out nicely.” Mark also knew he didn’t want to take over his father’s electrical contracting business. “I had learned many great and useful things working for him but, as they say, it wasn’t my cup of tea.”

Outside of work, Mark’s cup of tea is playing music, whether it’s practice, rehearsal or performance, especially if it’s with friends. When he’s not making music, he enjoys listening to it. Some of his favorites are classical and wind band music as well as Turkish and Middle Eastern music. And when he really wants to relax, Mark loves to hang out at home with his wife, Lynn, and their dog, Mr. Sunny. Throw in some Thai food and caramel cake for dessert, and he’s in seventh heaven.